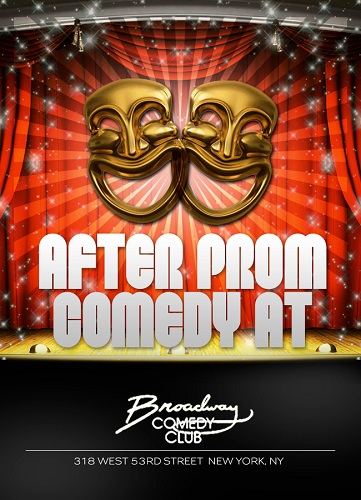 As your big event comes to a close, you have the same question on your mind as everyone else: Where’s the after party? While the rest of your classmates take the traditional nightclub and lounge route, you want a dose of lighthearted fun to keep the night rolling. Broadway Comedy Club’s got the intimate comedic experience you’ve been looking for.

Opening in 2003 in the heart of Times Square, this venue is the only bi-level entertainment establishment with three showrooms in New York City. As you already know, there are plenty of activities to participate in the tourist paradise of Times Square. Seasoned New Yorker’s will still find pleasure in visiting the ever-updated Madame Tussaud’s wax museum full of celebrity figures. Theatre professionals and those interested in the industry should check out The Drama Book Shop for book signings by both established playwrights and theatre arts enthusiasts. Of course, there are also plenty of Broadway shows to pop into and enjoy.

Al Martin, an accomplished comedian and the founder of the Broadway Comedy Club, is well-known for his contribution to the comedy scene in New York City. He’s helped to establish the careers of many a famous comedian. Sarah Silverman, Tracy Morgan, and Wanda Sykes are a few of the big names that have graced Al’s stage. With the classic exposed brick wall and stage setup, you’re sure to appreciate the typical grungy vibe of a New York City comedy club that’s boosted the careers of both amateur entertainers as well as bigger acts. Accommodating up to 500 guests and providing top-notch food and refreshments, this comedy-rich entertainment complex is sure to delight your senses.